The changing face of Chinese architecture

The rise to economic and political prominence of the People’s Republic of China is one of the most striking features of the 21st century.

Indeed, many astute observers believe that our era will in time be recognised as the ‘Chinese Century’. There is certainly no doubt that China leads the world in terms of architectural ambition, with some of the most flamboyant, spectacular, and downright crazy buildings springing up across the country in recent years.

In our latest blog we take a look at some of the most characteristic themes of Chinese Architecture, as well as what the future may have in store.

Like so much in the world’s most highly populated country, the sheer scale of Chinese architecture can be breath-taking.

China is home to 8 of the world’s 20 tallest buildings, including the second tallest building in the world – The Shanghai Tower. Located in, you guessed it, Shanghai; the tower stands some 2000 feet, and 120 floors tall. 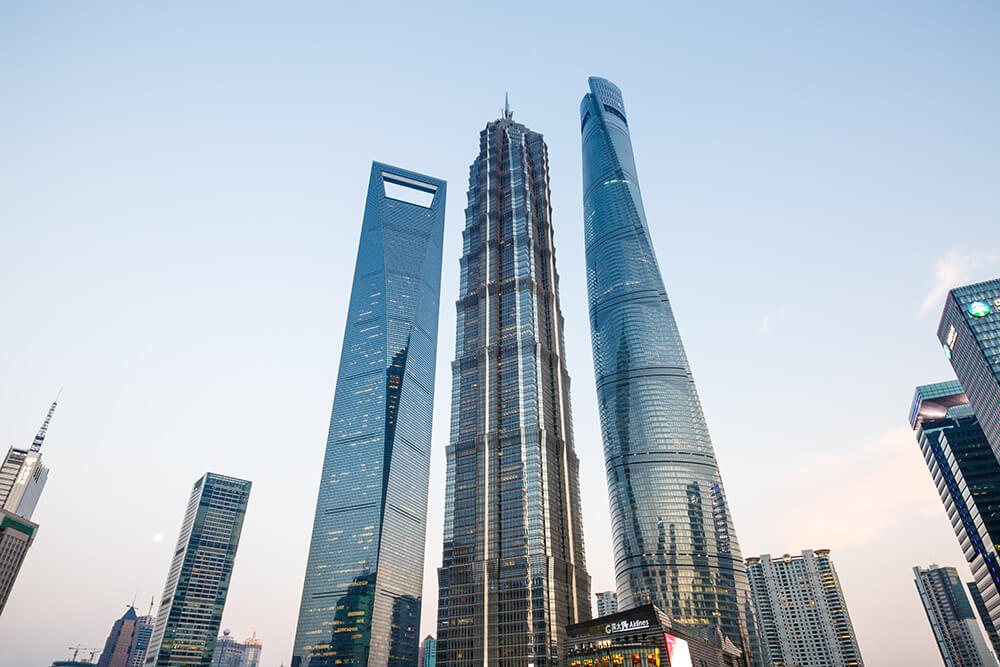 Aside from its colossal size, the tower is notable for its innovative design, with nine twisting, cylindrical buildings seemingly stacked on top of one another. The Shanghai Tower was designed by the Chinese architect Jun Xia and the American firm Gensler. No sooner is one Chinese super-skyscraper completed then another, bigger, one comes along and dwarfs it. Scheduled for completion before the end of the year, Shenzhen’s Ping An Finance Centre will very soon overtake the Shanghai Tower as the world’s second largest skyscraper.

At 2165 feet and 115 stories tall, the building is reminiscent of a svelte, slightly more sophisticated Empire State Building, right down to the needlepoint spire. The Ping An Finance Centre, incorporates ‘a complementary language of light colored stone and glazing’ and is designed by US firm Kohn Pedersen Fox (KPF).

One of the most innovative and influential modern Chinese architecture firms is MAD. They have pioneered a design concept that aims to temper the raw urbanism characteristic of contemporary China, with the wild beauty of the traditional, idealised Chinese landscape.

Their flagship project, the Chaoyang Park Plaza, a complex of skyscrapers, office blocks and public spaces, is inspired by, and modelled on, the mountains, hills and lakes depicted in Chinese ‘shan-shui’ paintings.

The stunning skyscrapers themselves are intended to replicate rock-formations, while two residential courtyard buildings are designed to recreate “the freedom of wandering through a mountain forest”.

MAD said that they aimed to create a ‘balance between high urban density and natural landscape’ by “transforming features of Chinese classical landscape painting, such as lakes, springs, forests, creeks, valleys, and stones, into modern city landscapes”.

China has attracted some of the world’s leading architects and engineers to assist in the construction of its wildly wonderful buildings. Yet this has created something of a counter-reaction, with the state recently intervening to prohibit “oversized, xenocentric, weird” architecture, devoid of cultural tradition. Instead, future buildings should be “suitable, economic, green and pleasing to the eye.”

Many have seen this as heralding the end of the weird and the wonderful in Chinese architecture, an end to such buildings as the Central Television Headquarters, which looms over the city of Beijing like a massive pair of trousers, the famous ‘Bird’s Nest’ stadium of the 2008 Olympics, or the Guangzhou Circle (literally a massive circle).

Feng Guochuan, an architect from Shenzhen, said that the state pronouncement was already being felt at a local level, with ‘local governments now tending to approve more conservative designs’.

This appears to be part of a wider policy of the Chinese government to forge their own unique national architectural style, and to move away from the multi-national diversity which has been its defining characteristic to date.

This much was suggested by Patrik Schumacher, director of Zaha Hadid Architects, a firm which has been at the forefront of China’s cosmopolitan approach to architecture in recent years.

In an interview with Deezen, he said that

“I feel that there is this attempt by the Chinese leadership to try to make itself more independent and rely on its own talent,”

This is perhaps an inevitable consequence of the growing self-confidence of the Chinese nation, but also an insight into their insecurities in relying too heavily on artistic or cultural trends which are not entirely their own.

Either way, there is a feeling that the ‘weird and wonderful’ era of Chinese Architecture may be coming to an end. We can but hope that the new, state orchestrated, direction is as bold and as beautiful as the first.